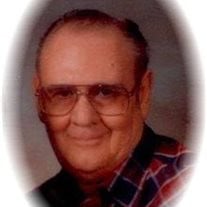 A service for Charles Robert Mehls was held 8:00 p.m. Thursday, October 16, 2014 at Hastings Funeral Home in Perry. Visitation was from 6:00 until the time of service. Pastor Tim Johnson of the First Christian Church in Perry provided words of comfort. Honorary bearers were Madison Mehls and Russ Mersman. Casket bearers were: Mark Wolf, Arielle Hansel, Sierra Coleman, Carter Mehls, Jim Kilts and Steve Knight. Interment took place at 10:00 a.m. Friday, October 17, 2014 at Violet Hill Cemetery in Perry. Charles Robert Mehls, son of Robert Earl Mehls and Dortha Wells Mehls, was born July 28, 1938 in Centerville, IA and died October 13, 2014 at St. James ~ Perry Lutheran Home. Charles was 76. Charles grew up on his parents' farm near Seymour where many of his later interests were formed. He graduated from Seymour High School in 1957. He entered the U.S. Army and received an honorable discharge. Charles was employed, doing what he loved, farming for others in the area. He started his life's career at age 21, working as a truck driver for Southwest Freight from 1959 to 1983, he then went to Chicago where he worked for Yellow Freight from 1983 until 1992 when he retired from the union, then in 1995 Charles drove for Midwest until he retired after a total of 41 years of driving in 2000. His CB Radio was a big part of his life and his handle was "Perry Dog". Melba Phelps became his wife in 1960 and they were blessed with two children, Carlene and Kenneth. In 1966 the family moved to Perry. Melba died in 1999. Charles later married Delores Kane and he left the area until after her death in 2009. He returned to Perry and made his home at Spring Valley Retirement home until 2013 when he became a resident of St. James ~ Perry Lutheran Home. Charles was a joy to his family and was adored by his grandchildren. Arielle had the opportunity to cuddle him during his last hours Monday. In prior days he was a member of the Moose Lodge, was a proud member of the Teamsters for 38 years and had served as a Chapter Officer. Yard work, old time country music, horses and his extensive toy John Deere collection were favorites. Charles was preceded in death by his parents and his wife Melba. His memory will lovingly live on with his daughter Carlene Coleman (Kelly) of Perry, IA; his son Kenneth Mehls (Julie) of Johnston, IA; four grandchildren: Arielle Hansel (Ben) of Perry, IA; Sierra Coleman of Perry, IA; Carter Mehls of Johnston, IA and Madison Mehls of Johnston, IA; sisters-in-law June Phelps of Bethany, MO; Jackie Phelps Stephens of Mercer, MO, nieces, nephews, other relatives and many friends.

A service for Charles Robert Mehls was held 8:00 p.m. Thursday, October 16, 2014 at Hastings Funeral Home in Perry. Visitation was from 6:00 until the time of service. Pastor Tim Johnson of the First Christian Church in Perry provided words... View Obituary & Service Information

The family of Charles Robert Mehls created this Life Tributes page to make it easy to share your memories.