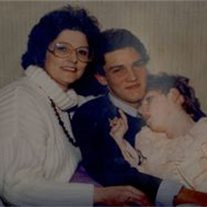 Charlene Jo Carpenter Rothmeyer Mitchell, sixth child and second twin daughter, born to Boyd David Carpenter and Josephine Marie Greenwaldt Carpenter, was born on August 24, 1952 in the Dexter Hospital and Clinics in Dexter, Iowa and died May 15, 2008 at the Dallas County Hospital in Perry, Iowa at the age of 55 years, 9 months, and 21 days. The family lived in Minburn, Iowa until 1964 when Josephine moved to Perry with her five youngest children. Charlene attended Perry Community Schools with her siblings, until her marriage to Richard Rothmeyer Jr. on February 24, 1969. They became parents to Anthony (Tony) and Jennifer (Jenny). Charlene and her children moved for a time to Clinton, Iowa to live with her sister Carla and her husband Roger Bousman Sr... She later returned to Perry where she continued to make her home for most of her life. Over the years, Charlene was a waitress, a bookkeeper, and later a caretaker for her daughter. After Jennifer's death on September 17, 1994, Charlene continued to live with and care for her mother and uncle, Marvin (Mick) Hull. On October 31, 1995, when her mother died, her uncle moved to a nursing home in Des Moines. Charlene was so happy when she became engaged to Calvin Miller, unfortunately Cal died unexpectedly on December 7, 2003. Her children and grandchildren were the loves of her life and she had the privilege of babysitting with Alyssa and Zachary for several years until they entered school. She loved all of her family dearly, but especially loved the little ones. She was able to baby-sit and therefore develop a special bond with Marlene's grandson Kody, who is now in first grade. Every child she was around loved her and called her Aunt Nonnie, especially her great nieces and nephews who lived close enough that she could help care for them: Justin, Haley, and Jacen Ray; Josie and Kaylynn Bousman; Tyler and Owen Kilts; and Kody, Trevor, and Mackenzie Kilts. She enjoyed cooking, reading, doing crafts, collecting angels, and helping others. Preceding Charlene in death were her parents: Josephine Carpenter McCamey; Charles McCamey, in 1982; and Boyd Carpenter, in 1986; her daughter: Jennifer Rothmeyer; and two brothers: Ricky Robert Carpenter on March 19, 1996; and Larry Vern Carpenter on April 20, 2005. Survivors include her son: Tony Rothmeyer and his wife Laura and their children: Alyssa and Zachary, all of Grand Junction, Iowa; one brother: Bud Carpenter (Joyce) of Des Moines; and four sisters: Vivian Luthie (Dean) of Junction City, Kansas; Darleen Webber (Bud) of Unionville, Missouri; her twin sister: Marlene Kilts (James) of Perry; and Carla Bousman of Perry; very special friend, Florence Lee of Perry; numerous nieces, nephews, great nieces and nephews, cousins, other relatives, and friends.

The family of Charlene Jo Rothmeyer Mitchell created this Life Tributes page to make it easy to share your memories.