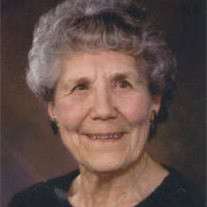 Catherine Jacqueline (Kate) Hurd died on May 14, 2005 at the Rowley Memorial Masonic Home in Perry, Iowa. She was 86 years old. Kate was born on January 17, 1919 in Algoma, Wisconsin to Joseph and Antonia Knaapen. Both of Kate's parents emigrated from the Netherlands. She grew up in Algoma and Sturgeon Bay, Wisconsin. When she was sixteen, Kate enrolled in Fontbonne College in St. Louis, Missouri, where she majored in English and music. Shortly after graduating, Kate's mother became seriously ill and Kate returned to Sturgeon Bay to help with the family's bakery. It was there she met her future husband, Gene Hurd, who made periodic visits to Sturgeon Bay while serving with the United States Coast Guard. After their marriage on January 2, 1946, Kate and Gene made their home in Perry, Iowa and lived there for the rest of their lives. Gene died in 1991. Kate and Gene had nine children together: Joe (and Judy) Hurd of Papillion, Nebraska; Steve Hurd of Grand Junction, Colorado; Patty (and Tim) Will of Des Moines, Iowa; Dick (and Denise) Hurd of Grand Junction, Colorado; Rosemary (and Henri Dumont) Endicott of Petaluma, California; Ed (and Quonnella Lee) Hurd of Fairfax, California; Bill (and Sheila) Hurd of Grand Junction, Colorado; Kathy (and Steve) Wallcave of Union City, California; and Beth (and Bill) Anderson of Marion, Iowa. She is survived by all nine children, eighteen grandchildren, and three sisters: Marie Ehnert of Greenfield, Wisconsin; Betty Bemis of Waupaca, Wisconsin; and Lucille (Pal) Scahill of Simpsonville, South Carolina. In addition to her husband, Kate was preceded in death by her parents; two brothers, Jim Knaapen and Bill Knaapen, both of Sturgeon Bay, Wisconsin; one sister: Rica Antoine of Shively, Kentucky; and her daughter-in-law: Carol Hurd of Grand Junction, Colorado. For fifty-nine years Kate actively volunteered with St. Patrick's Catholic School and Church in Perry. She especially enjoyed playing piano and organ for music classes, Masses, services at other churches, and many events throughout the community. Kate frequently shared her musical talents with the residents of the Masonic and Lutheran Homes in Perry. For many years, she accompanied high school students in music competitions. She also enjoyed participating in Catholic Daughters, Regina Guild, Perry Fine Arts Commission, Dallas County Hospital Auxiliary's immunization program, and two bridge clubs. She loved traveling and she loved spending as much time as possible with her children and grandchildren. A public visitation will be held at Hastings Funeral Home in Perry on Monday May 16, 2005 from 9:00 a.m. to 5:00 p.m. and will continue on Tuesday from 9:00 a.m. to 9:00 p.m. with the family present to greet friends from 5:00 p.m. to 8:00 p.m. There will also be a Vigil Service at 7:00 p.m., followed by a time of community sharing of memories or brief stories about "Life with Kate". A Memorial Mass will be held at St. Patrick Catholic Church in Perry on Wednesday, May 18, 2005 at 7:00 p.m., followed by a reception at St. Patrick School gymnasium. Memorials contributions can be made to St. Patrick's Foundation, 1312 3rd Street, Perry, Iowa 50220 or may be left at Hastings Funeral Home in Perry.

Catherine Jacqueline (Kate) Hurd died on May 14, 2005 at the Rowley Memorial Masonic Home in Perry, Iowa. She was 86 years old. Kate was born on January 17, 1919 in Algoma, Wisconsin to Joseph and Antonia Knaapen. Both of Kate's parents emigrated... View Obituary & Service Information

The family of Catherine Hurd created this Life Tributes page to make it easy to share your memories.

Send flowers to the Hurd family.