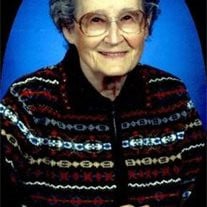 Burnetta Christine Suter, daughter of Walter Edward Collins and Marie Amanda Thompson Collins, was born June 14, 1917 in Belden, Nebraska and died February 25, 2007 at the Greene County Medical Center at the age of 89 years, 8 months and 11 days. Burnetta went to school in Laurel, Nebraska and graduated from Laurel High School in 1935. She was united in marriage to Kenneth Miles Suter on April 4, 1937 in South Sioux City, Nebraska and they were the parents of 3 children. In earlier years, Burnetta worked as a clerk at a General Merchandise Department Store, and later worked many years as a clerk for J.C. Penney's in the Sioux City area. Burnetta and Kenneth moved to Perry in 1990. Burnetta was a member of the Laurel Chapter of the Eastern Star in South Sioux City and later transferred to Chapter #142 in Perry. She also transferred her church membership from Augustana Lutheran Church in Sioux City to Mt. Olivet Lutheran Church in Perry where she was a faithful member. She enjoyed reading, gardening, cooking, traveling on the bus and in earlier years loved to sew. Burnetta was preceded in death by her parents; her husband Kenneth on APril 29, 1992; daughter, Donna Jean Bruening on January 27, 1987; brothers, Wallace Collins and Walter Gene Collins. SHe is survived by her daughter, Diane Meinecke and husband Hal of Jamaica, Iowa; son, K. Edward Suter and wife Judy of Dawson, Iowa; son-in-law, John Bruening of Storm Lake, Iowa; 10 grandchildren; 16 great-grandchildren; one sister, Dorothy Mathwig of Ft. Collins, Colorado, other relatives and many friends.

The family of Burnetta Christine Suter created this Life Tributes page to make it easy to share your memories.

Send flowers to the Suter family.