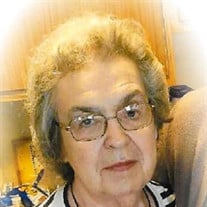 Graveside Services for Beverly Ann Reed were held 11:00 a.m. Monday, May 17, 2021 at the Elmwood Cemetery in Minburn, Iowa. Visitation was held from 2:00 p.m. until 4:00 p.m. Sunday, May 16, 2021 at Hastings Funeral Home in Perry. Chaplain Jestin Thomas of Kindred Hospice Care in Panora, Iowa provided words of comfort. Honorary bearers were: Joe Reed, Shane Vanover, David Smothers,Wes Sable, Dwayne Reed, Daryl Sable, Ed Reed and Keith Wilson. Recorded songs selected were: In The Garden and Amazing Grace. Beverly Ann Reed, daughter of Malford Arthur Kinney and Elsie Josephine Hays Kinney, was born June 6, 1933 in Des Moines, Iowa and passed away May 11, 2021 at Spurgeon Manor in Dallas Center, Iowa. Beverly grew up in Minburn and graduated from Minburn High School in 1951. After high school Beverly married the love of her life Orville Wayne Reed on June 16, 1951 in Perry, Iowa. They were blessed with a son Ronald and a daughter Cheryl. The family lived on an acreage outside of Des Moines where they had a creek for the ducks and raised cows, pigs, and chickens. Then they moved to Minburn and made their forever home. Beverly worked for various insurance companies over the years and in 1971 she bought her very own Insurance Agency. She loved planting flowers in her flower bed and working outdoors, but what she loved most in life was spending time with her grandchildren and all of her family. Beverly will always be known for her enterprise in the little town of Minburn and for the love and compassion she showed to everyone throughout her life. She was a member of the Des Moines Insurance “Women” Group, United Methodist Church in Minburn, and American Legion Auxiliary. Beverly was preceded in death by her parents Malford and Elsie Kinney, husband Orville Reed, and brother Ray Kinney. She is survived by her children Ronald Richard Reed and his wife Janet of Wiota, Iowa; Cheryl Reed and Keith Wilson of Minburn and Tammy McGinnins also of Minburn; three grandchildren: Chelby Vanover and her husband Shane of Woodward, Chekota Smothers and her husband David of Bouton, and Joe Reed and his wife Alyssa of Thibodaux, Louisiana; two great-granddaughters: Skyla Ann Vanover and Eleanor Beverly Reed; sister Jane Simpson and her husband Jimmy of Princeton, Missouri; nieces, nephews, other relatives, and many friends. Memorials in her name are suggested to Kindred Hospice Care in Panora and can also be sent to Hastings Funeral Home – Box #204 – Perry, IA 50220.

The family of Beverly Ann Reed created this Life Tributes page to make it easy to share your memories.

Send flowers to the Reed family.