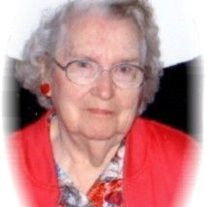 Beulah Marie Cox Moore, daughter of Edward Otto Cox and Magdalene (Pohl) Cox, was born April 3, 1918 at Cooper, Iowa and died July 6, 2010 at the Perry Lutheran Home, Perry, Iowa, at the age of 92 years, 3 months and 3 days. Beulah lived all of her life in the Jamaica, Iowa area. On April 16, 1938, she was united in marriage with Jesse Roscoe Moore at Fort Dodge, Iowa. They were parents of three sons: Ronald Jesse; David Roger and Larry Eugene. The couple farmed west of Yale and in 1943 the family moved into Jamaica. Beulah was employed by the Jamaica Public School System, working in the lunchroom program. She was also employed by the Perry Bowl. Beulah was a lifetime member of the Jamaica American Legion Auxiliary as well as a member Jamaica Union Church where she was a member of the Ladies Aid Society. She was also a member of the Birthday Club. She enjoyed sewing, reading, playing Bingo and watching Michael Jordan play for the Chicago Bulls. Beulah is noted from her love of cooking, especially cinnamon rolls. She was preceded in death by her parents, her husband, Jesse Roscoe Moore on April 18, 1998; her brother Raymond Cox; her daughter-in-law Janice Moore, and her grandson, Bill Moore. Beulah is survived by her sons: Ronald Moore and his wife Lois of Omaha, Nebraska; David Roger Moore of Des Moines; and Larry Moore and his wife Juli of Mingo; five grandchildren: Jeffrey Moore and his wife Rebecca of Eagle River, Alaska; Bradley Moore and his wife Sharon of Avon Lake, Ohio; Brian Moore and his wife Sherry of Pleasant Hill; Kevin Moore of Des Moines, and Michael Moore of Mingo; ten great-grandchildren: Matthew, Erik, Christopher, Allison, Melissa, James, Gabe, Lexis, Zach and Gavin; her brothers: Sidney Cox and his wife Jerri of Pleasantville, Iowa and Howard and his wife Beryl Cox of Perry, Iowa; nieces, nephews, other relatives and many friends. Memorials may be made to the Jamaica Community Center or the Jamaica Union Church and may be left at Hastings Funeral Home.

The family of Beulah Moore created this Life Tributes page to make it easy to share your memories.

Send flowers to the Moore family.