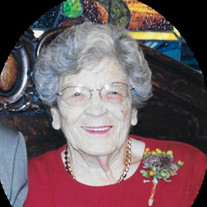 Services for Betty Jean Lingren were held 10:00 a.m. Friday, November 22, 2019 at the Pilot Mound United Methodist Church. Visitation was after 1:00 p.m. Thursday with family present from 5:00 until 7:00 p.m. also at the church. Hastings Funeral Home in Jefferson was in charge of the arrangements. Rev. Phillip Berger officiated the service. Honorary casket bearers were: Stan Jones, Gene Crouch, Rich Larson and Steve Smith. Casket bearers were: Alan Lingren, Darrell Lingren, Tom Good, Randy Good, Deck Crouch and Sean Whalen. Musicians were: Cheryl Lingren, Allison McGuire and Carol Shivers. Songs chosen were; There Is A Savior, The Lord’s Prayer and I’ll Be Seeing You. Interment took place at Lawn Cemetery in Boxholm, Iowa. Following the services at the cemetery was a luncheon at the church. Betty Jean Lingren, daughter of Marion Merkle Wirtz and Mildred Violet Williams Wirtz, was born February 17, 1926 in Boone County, Iowa, and died November 18, 2019, at the Israel Hospice House in Ames, Iowa at the age of 93 years. She attended and graduated from the Jordan Consolidated School in 1943. She then attended the Boone Junior College for one year. During World War II, Betty worked for 18 months in the Signal Corps of the War Department in Washington, DC, translating code from the Pacific. From December of 1945 until April of 1947, Betty worked as secretary to the superintendent of Jordan Consolidated School. On November 8, 1946, Betty was united in marriage with Earl Floyd Lingren at the Prairie Center Church north of Jordan, Iowa. To this union, five children were born: Steven, Stanley, Melinda, Machelle, and Lorna. After their marriage, the couple lived in Betty’s Grandma Williams’ apartment in Boone, Iowa, later moving to their own apartment. In 1948, they moved north of Boone to start farming, and moved to rural Pilot Mound in 1953. In 1969, they moved to their present farm, and in 1996, the couple built their retirement home on the farm, though they never really retired. Two years ago, Betty moved to the Grand View Care Center in Dayton, Iowa. Betty was a member of the Pilot Mound United Methodist Church and the American Legion Auxiliary. She was awarded the Honorary State 4-H Member Award in 1988, and she, Earl and Stanley were honored as Master Pork Producers in 1994. Betty was also a 4-H leader and Sunday School teacher for many years. In 1983, Betty, Earl and their sons were given the Meritorious Service to 4-H Award. Betty worked side-by-side with Earl on the farm as well as caring for her children, grandchildren, and great-grandchildren. She also maintained all of the bookwork for the farms and livestock. She proved to be a wonderful role model, having always been a guiding hand in the lives of her grandchildren. Her pride and joy were her grandchildren and she didn’t miss an opportunity to brag about them. Her hobbies included baking pies, overseeing the grandchildren’s 4-H projects, sewing, flower gardening and canning vegetables from her numerous gardens. Betty was preceded in death by husband Earl on November 21, 2008; her father Marion in 1975; her mother Mildred on January 14, 2000; a daughter Machelle Peggy, in infancy; her brother Bill Wirtz; sisters Ruth Swanson and Kay Richards, and her brother-in-law Kenny Richards. She is survived by two sons: Steven (Chris) Lingren of Ogden and Stan (Cheryl) Lingren of Pilot Mound; two daughters: Melinda (Tom) Heater of Jefferson and Lorna (Rob) Scott of Pilot Mound; sixteen grandchildren: Jenifer (Brent) Badger of Bagley; Jessica Savits (Mark Hamilton) of Jefferson; Jessica Bruere (Jason Lemmert) of Bondurant; Nicole (Jay) Shearer of Bettendorf; Rick Geisler (Kelly McElwee) of Sheridan, Wyoming; Emily (Ben) Shivers of Bondurant; Brooke (Dana) Vote of Denton, Nebraska; Allison (Andy) McGuire of Oskaloosa; Alexa (Tyler) Pickering of Kansas City, Missouri; and Bryce, Aaliyah, Vanessa, Ebony, Viatris, Kaleb and Nate Scott all of Pilot Mound. She is also survived by 10 great-grandchildren: Kamden, Abigail, Brock and Elise Badger; Ty and Lily Shearer; Briana Bruere, Tinley and Sutton Vote, and Brody Shivers; two sisters: Joan McDonald and Judy (Gary) Calsyn; numerous nieces, nephews, other relatives and friends. Memorials in her name may be sent to Hastings Funeral Home - Box 204 - Perry, IA 50220

The family of Betty Jean Lingren created this Life Tributes page to make it easy to share your memories.

Customized sympathy cards. Mailed for you.