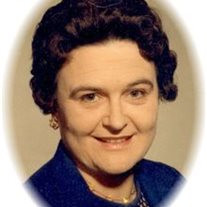 Betty Mae Friedrichsen, daughter of Ernest H. Rothfus and Grace Elizabeth Hammar Rothfus, was born July 9, 1928 in Perry, Iowa. She passed away November 17, 2005 in Dallas County Hospital at the age of 77 years, 4 months and 8 days. Betty attended Gardner school and graduated from Perry High School in 1945. In 1950, she graduated from Iowa Lutheran nursing school in Des Moines. Betty was united in marriage to Eugene Friedrichsen at the Little Brown Church in Nashua, Iowa on March 2, 1951. They were the parents of seven children: Karen, Donna, Norma, Gary, Robert, Janette and John. The family made their home on a farm near Woodward. In addition to raising her family and nursing, Betty was very involved with her community. She was a 4-H leader, the organist for Christ Lutheran Church in Bouton, where she was a long-time member, and also an active member of the Ladies Aid. Betty loved to crochet potholders and paint landscapes. She also loved fishing and going trapping with John at 3:00 a.m. Betty was preceded in death by her parents, her brother Don (Harriett) Rothfus, and their son Fred. She is survived by her daughters: Karen Henson (Dick) of Bayard, Donna Wells (Jerry) of Chatham, Virginia, Norma Seibert (Charles) of Adel, and Janette Friedrichsen of Jefferson; her sons: Gary (Linda) of Minburn, Robert (Lisa) of Marshalltown and John of St. Croix Falls, Wisconsin; 15 grandchildren; and 9 great-grandchildren; nephews: Ted Rothfus of New York state and Ed Rothfus of Kenya, Africa; many other relatives and a host of friends.

The family of Betty M. Friedrichsen created this Life Tributes page to make it easy to share your memories.

Send flowers to the Friedrichsen family.