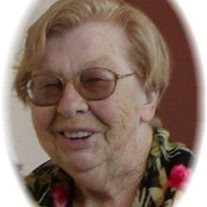 Barbara Ann Hegstrom, daughter of Russell Parker and Hyacinth Marchant Parker, was born April 10, 1928 near Perry, Iowa, and died February 16, 2006 at Iowa Methodist Medical Center in Des Moines, Iowa, at the age of 77 years, 10 months and 6 days. Barbara graduated from Perry High School in 1946 and then attended Iowa Teachers College (now known as University of Northern Iowa) in Cedar Falls for two years. She worked at the Perry Telephone Company before and immediately following her marriage to Bernard Emil Hegstrom on March 6, 1950. Barbara and Bernard were parents of seven children: Keith, Mike, Ann, John, Julie, Paul Emil, and Edward. Barbara worked side by side with Bernard on the farm. The family farmed near Angus and later near Rippey before making their home near Jamaica. The couple retired from farming in 1980 and moved into Perry in 1982. Bernard died in 1996 and Barbara continued to make her home in Perry. She loved her family and spending time with them. Barbara also enjoyed The Arts, music, going to the movies and gave love and a good home to her cats and dog. She was enjoying her membership in the Telephone Pioneers. In addition to her husband Barbara was preceded in death by her parents, two sons: Paul Emil in 1961 and Bernard Keith in 2002; sister: Alice Ocheltree and 2 great-grandchildren: Gracie and Taylor Mull. Barbara is survived by her two daughters: Ann Hegstrom and her friend Gary Hefty of DeSoto, Iowa; and Julie Beyerink and her husband Dan of Monroe, Iowa; three sons: Mike and his wife Mary of Jefferson, Iowa; John Hegstrom and his wife Deborah of Fremont, Nebraska; Edward of Des Moines; one daughter-in-law: Nancy Diane Hegstrom of Adel, Iowa; 14 grandchildren: Jen Mull; Erica Hegstrom; Mandy Hegstrom; Cathy Berry; Shawn Hegstrom; Alicia VanDorn and her husband Jeff; Eric Hegstrom; Paul Hegstrom; Rachel Hegstrom; Sarah Hegstrom; Matthew Hegstrom; Janet Heggen and her husband Evan; Steve Beyerink and Kyle Beyerink; 9 great-grandchildren; brother-in-law Ronald Dean Hegstrom; nieces, nephews, other relatives and friends.

The family of Barbara P. Hegstrom created this Life Tributes page to make it easy to share your memories.

Send flowers to the Hegstrom family.