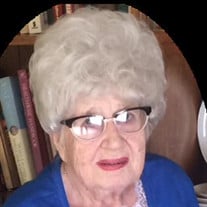 Visitation for Barbara Jean Fister was held after 1:00 p.m. Tuesday, June 18, 2019 with family present from 5:00 until 7:00 p.m. followed by a Rosary with Myrna Smith, Presiding at Hastings Funeral Home in Perry. A Memorial Mass was held 12:00 p.m. Wednesday, June 19, 2019 at St. Patrick Catholic Church in Perry with Father Chris Reising officiating. Micky Frantum was the lector. Honorary bearers were Barb’s Co-Workers and Friends at the Dallas County Hospital. Eucharistic Ministers were Leann Pittman and Tim & Carol McDermott. Jan Pattee was the musician. Maci Tunink, Sophia McDevitt and Maddie McDevitt were the altar servers. Gift bearers were Kimberly Ash and Kevin Fister. Bob VanGundy and Mike Tighe were the ushers. Barbara Jean Fister, daughter of Donald Dean Ellis and Ferne Grace Smith, was born August 17, 1935 in Jamaica, Iowa and died June 15, 2019 at her home in Jamaica. She was 83 years old. Barbara graduated Jamaica High School in 1953. She graduated St. Anthony Nursing School with her RN degree in 1958. On October 29, 1960 she was united in marriage with Larry Lee Fister at St. Patrick Catholic Church in Bayard. Larry was also a Jamaica H.S. grad who started working for the Milwaukee Railroad at age 16. His railroad years took them to Perry, Iowa, Kansas and then to Jamaica where they settled. The couple was blessed with two children Kimberly and Kevin a bit later in their marriage. Barb had a wonderful career as a nurse over 35 years, first at Kings Daughters Hospital in Perry and then at the newly built Dallas County Hospital. She is still remembered by many as “their” nurse. After retirement, she worked for Dr. Beattie for a time. She was a dedicated caregiver to Larry during his illness with cancer. Barb had a fun loving personality and could entertain co-workers and friends with her “roasting” skills. Barb had a very serious side also, and was a dedicated Christian who prayed four times a day. She was known as the dear friend who asked if she could pray for anything or concern they might have. Barb was indeed a prayer warrior. She had a way of knowing where and when she should be available to support others. Maggie Radebaugh was her best friend and the two shared many years of life and experiences together. Barb liked to play cards and enjoyed her Bridge clubs and friends. Of course, she was a regular for therapy at ToJo’s. Barb was a big fan of the Iowa Hawkeyes, but also rooted for the Iowa State Cyclones and the Golden State Warriors. She liked to crochet and in earlier years attended her children’s activities and bowled with Larry. Barb was active in her community and was quietly very generous with others in need. She was a very active member of St. Joseph Catholic Church in Jamaica which was so very important to her. As with every member, Barb was sad when the church closed. Then she attended and supported St. Patrick Catholic Church in Perry. Her dear brother Richard Ellis and his wife Eileen were so attentive and took her on much loved trips to the casinos in Tama and Jefferson. And she loved to play Bingo whether at the American Legion, Elks Lodge or Jamaica Community Center. Barb was preceded in death by her parents and her husband Larry on January 26, 2003. Her memory will be cherished by her loving children, daughter Kimberly Ash and her husband Eric of Perry and son Kevin Fister of Guthrie Center; two granddaughters Allison and Emily Ash; much loved brother Richard Ellis and his wife Eileen of Panora; nephew Chris Ellis of Panora; and niece Renee Hall and her husband Jim of Omaha, NE; great nieces Brielle and Kynlie Hall; aunt Verla Jean Ridnour of Perry; other relatives and many, many friends. Barb collected frogs and she would want you to keep their meaning ‘Forever Rely On God’ in your hearts and minds. In Lieu of flowers memorials can be sent to the Dallas County Hospital Foundation and Guthrie County Relay for Life.

Visitation for Barbara Jean Fister was held after 1:00 p.m. Tuesday, June 18, 2019 with family present from 5:00 until 7:00 p.m. followed by a Rosary with Myrna Smith, Presiding at Hastings Funeral Home in Perry. A Memorial Mass was held 12:00... View Obituary & Service Information

The family of Barbara Jean Fister created this Life Tributes page to make it easy to share your memories.

Visitation for Barbara Jean Fister was held after 1:00 p.m. Tuesday,...

Send flowers to the Fister family.