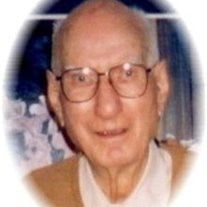 Aubrey Delmaine Taylor, 93, of Perry, died at the Perry Lutheran Home on Friday, November 18, 2005. Aubrey was born September 13, 1912 at Coon Rapids, Iowa, the eldest son of Frank L. Taylor and Emma M. Erps Taylor. During childhood, the family lived in several rural areas near Bagley, Iowa before moving to Perry in 1923. Aubrey graduated from Perry High School in 1931 and the next year began working for the Perry Paint and Glass Co. He worked there for the next 10 years, entering the United States Army Air Force April 7, 1942. He served as a Sergeant in Intelligence and Ground Training at various locations on the west coast. He was discharged November 28, 1945 in Portland, Oregon, at which time he returned to Iowa. After several years in Des Moines with the State Department of Social Welfare, he moved to Santa Barbara, California to complete his education at the University of California in 1953. He then worked for 10 years with the Oregon State System of Higher Education in Eugene, Oregon and 10 years with the Oregon Mental Health Division in Salem, Oregon. Aubrey was first married in 1944 and divorced in 1952. On November 28, 1959, he married Rachel Carolyn Van Osdol Johnson in Eugene, Oregon. After retirement in 1973, the family continued to live in Salem, Oregon enjoying traveling the west coast in their vacation travel trailer. Rachel entered the nursing home in 1988 and they moved to Perry in late 1989. Rachel passed away February 6, 1997. Aubrey was preceded in death by his parents, his wife Rachel, and his brother Francis. He is survived by his sister Ruby Ackerman of Woodward; 5 nieces and nephews; other relatives and friends.

The family of Aubrey D. Taylor created this Life Tributes page to make it easy to share your memories.

Aubrey Delmaine Taylor, 93, of Perry, died at the Perry Lutheran...

Send flowers to the Taylor family.